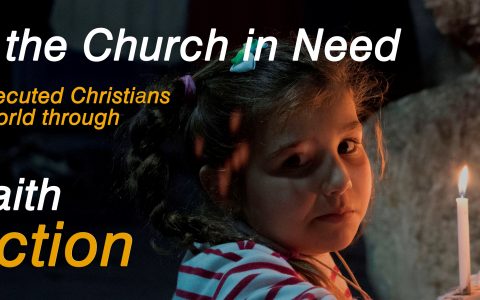 Programme 01  – Focuses on the situation for Christians in Pakistan.  Including Joseph Coutts, Archbishop of Karachi, on his ongoing inter-faith work there

Programme 02 – Describes its vital work in Iraq and Syria amid the ongoing crisis.  Highlight: life and death of a modern martyr – Father Ragheed Ganni

Programme 03 – China:  with Fr Bernardo Cervellera, Director of the Catholic news agency Asia News about the ongoing situation for Christians there

Programme 04 – The revival of the Church in Ukraine, plus an ACN Parish Representative on how people at home can contribute to the Charity

Programme 06 – Describes ACN’s vital work in Sudan and South Sudan amid the ongoing crisis.   The life of Auxiliary Bishop of Khartoum, Daniel Adwok – a staunch advocate for a Church under pressure from militant Islam and extreme poverty.
Programme 07 – Carnegie-Medal nominated author Corinna Turner talks about the release of her novella Someday, inspired by the tragic story of the Chibok schoolgirls kidnapped in April 2014

Programme 09 – Focuses on the situation in Egypt. ACN’s Mark Riedemann hears from Bishop Boutros Hanna about the situation for Christians there

Programme 10 – The charity’s work in Brazil including the life and work of Father Gino Alberati, a Capuchin priest who navigates the waters of the Amazon River in order to reach his people

Programme 11 – ACN speaks to His Excellency Archimandrite Nicolas Antiba, the Catholic Greek Melkite Metropolitan of Bosra, Hauran and Jabal Al-Arab in Syria about the situation of Christians suffering in Aleppo

Programme 12 – Focusing on Syria and the ongoing conflict. Host Mark Riedemann interviews His Beatitude Patriarch Gregorius Laham III, the spiritual leader of the Greek Melkite Catholic Church in Syria about the effects of the war