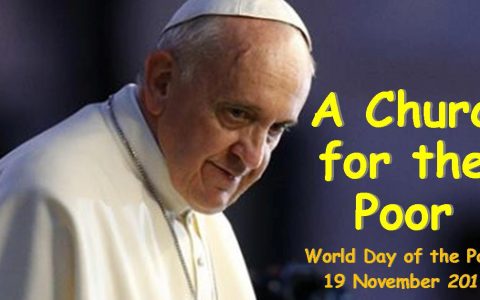 One of the first things Pope Francis said when he was elected Pope was that he wanted a Poor Church for the Poor and he has introduced an annual World Day of the Poor every November.  These programmes highlight some of the projects that various Catholic people, charities, and parishes are running to help the poor both in the UK and overseas.  We hope these programmes will inspire others to get involved either by helping existing projects or by giving them ideas to start their own.

Apostleship of the Sea with address by Bishop Mark O’Toole, introduced by Sean d’Rosario
BMS Mission – gap year in Uganda.  Isaac, Stefan, Amy and Sophie are four gap year students who have recently spent six months in Uganda. In this programme they tell Shelagh Godwin about their experiences
Burkina Faso and footsteps in the desert – Gillie Nicholls talks to Shelagh Godwin about her charity helping the poor and destitute in Burkina Fasco
CAFOD – Ged Edwards and Aileen talk about the work of CAFOD in Salford
CARITAS – Mark Wiggins, CEO Caritas Diocese of Salford talks about their work in the Diocese to Fr Jim Clarke
Children of the Dump – a charity helping to educate and supporting children living as scavengers on the largest rubbish dump in the Philipines.  Kay Makay talks to Shelagh Godwin
Christians against Poverty – Dom Maglieri explores the work of this, very necessary, Christian charity
Cornerstones – Ann Quinn from Cornerstones Charity, part of CARITAS Salford, talks about the work of this vital drop-in Centre
Ella’s Home – a sancturay for victims of human trafficking.  Emily tell Shelagh Godwin its story
Good Life Orphanage, Kenya – Fr Jim Clarke talks to the founder Mary Maquire about the Orphanage and School
Homeless Charities – Gerry Coates spotlights some of the many Catholic organisations involved in helping the Homeless
Human Trafficking and Slavery – Bishop Pat Lynch talks to Shelagh Godwin about the Church’s attempt to help victims of this awful crime.  Bishop Pat is the Chair of the Office for Migration Policy at the Catholic Bishops’ Conference of England and Wales
Lest we forget – Lochnagar Crater Memorial on the Somme with Richard Dunning talking to Shelagh Godwin about why he has preserved this historic site
Man of Peace – Bruce Kent talks to Shelagh about his life’s mission
Maranatha – Dennis Wrigley  – founder of the Maranatha community tells his story to Fr Jim Clarke
Mission in Honduras – Tim Rinaldi tells his story
Missionary – Janet Fearns  is a Franciscan Missionary of the Divine Motherhood from the Ladywell Convent in Surrey.  She tells Shelagh Godwin about her work and devotion which has taken her all over the world where she has seen poverty in many forms
Modern Slavery with the Medaille Trust – Jess Gealer is a former house manager for Medaille and has also worked with Hampshire police setting up programs and strategies for fighting trafficking
Modern Trafficking and Slavery with Sister Patricia Mulhall – a long-time campaigner for recognition of this huge world-wide problem
Orione Care – Philip Kehoe and Philip Moseley at Orione Care in Hampton Wick. Orione is a charitable company which provides high quality housing, care and support to older people, older people with dementia and adults with a learning disability
Orione Care – Molesey Horticultural and Arts Day Centre run by the Orione Group is visited by Shelagh Godwin who talks to staff and service users
Pilgrimage to Lourdes 1 – Adam and Barbara Simon talk to Shelagh Godwin about organising the Diocese of Arundel & Brighton’s annual pilgrimage there.  Music by the Redshirts and Gerry Coates
Pilgrimage to Lourdes 2 – Arundel & Brighton Diocese Lourdes pilgrimage helpers Lyn and Mary and Redshirt Ella talk to Shelagh Godwin about their experiences at Lourdes. Music by the Redshirts and Gerry Coates
St Steven’s Society – Nichola Hooper talks about the work of Jackie Pullinger with the destitute in the Far East and the foundation of the Society
Vivan los ninos in Colombia with  Kevin Abad with Music from the Watermeads Apostlate –  Street Child Africa  Gerry Coates talks about the charity and illustrates with poems from the pupils of the Ursuline High School Wimbledon –  Jacques Frances talks about the HCPT charity which takes less able children to Lourdes and we finish with a section on Sue Ryder who founded the Leonard Cheshire Homes at the end of World War II